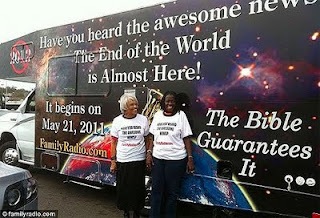 Well, as it turns out, May 21, 2011 was not the end of the world as a certain preacher predicted. I just tried to check in on his website but it must be maxed out... perhaps the end of the world... wide web for him. I must admit all the hoopla his prediction got did get me and a lot of other people thinking about the end and maybe that's not such a bad thing.

I didn't buy in to the prediction as some of his faithful did, selling their belongings and quitting their jobs to prep for the rapture. The thing that really made his claims seem bogus was that only 2% of people would be saved. Isn't God's mercy greater than that? I've heard heaven is a gated community, but wasn't Christ's sacrifice for more? I surely hope heaven's population is greater than hell's.

The bad thing of course is that since May 21, 2011 wasn't the end it just makes all of Christianity, if not all religions seem just a little less reputable. We do a good enough job of that ourselves.
Posted by Damien Schmitt at Saturday, May 21, 2011

Email ThisBlogThis!Share to TwitterShare to FacebookShare to Pinterest
Labels: 2011, judgement day, may 21, the end