We all make mistakes, it's not the end of the world 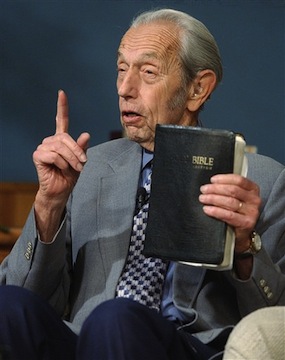 There are a lot of jokes going around about Harold Camping and his doomsday prediction going down in flames or lack thereof.

I do admire him in the way that I admire Jehovah's Witnesses having the gumption to go door-to-door.  I admire the "gullible" people who sold everything for what they believed in.  They may have been misguided but they actually lived their beliefs.

I've been misguided myself... often following my own nose.  I've been wrong about things I was absolutely certain about at the time.  We all make mistakes... it's not the end of the world.
Posted by Damien Schmitt at Monday, May 23, 2011

Email ThisBlogThis!Share to TwitterShare to FacebookShare to Pinterest
Labels: end of the world, Harold Camping

He is 'keeping on the watch.' Nobody can say he's not doing that.