Painting over the Enterprise

There were a lot of reasons we bought the house we now call our home.  The price was right, it had a  nice big yard and was located in a great neighborhood in a quiet cul de sac (that's French for "bottom of the bag" -- sounds better in French).  These are all the good reasons. 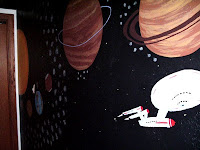 Then there's the other reason.  One of the kid's rooms had a mural of the starship Enterprise flying through the galaxy on the wall.  And at the time I thought that was a sure sign that this was most certainly the house to buy.  In retrospect I wonder if the real estate agent didn't paint that up there after doing some research on me.  Anyway I was sold and soon the house was too.

I knew I was going to have to paint over that mural since it was no Sistine Chapel and my wife was no Star Trek fan (at the time).  And since the painting depicted outer space, it was mostly black.  Gallons of primer and white paint later, it was Star Trek III all over again, the Enterprise was no more.  They also had wallpaper trim in the same room that I had to remove... so, yeah, I really was crying... just like at the end of Star Trek III... and II... and IV... and VI and even V* (*because it was so bad).

I was under the impression that white was a very good color for a room and that the room was ready to go for the new bundle of joy we're expecting.  Then my wife informed me that since Teresa's room was painted a color, that "we" should paint the new baby's room too just to be fair.  One simple fact I've learned: the pregnant wife is always right.  I just finished putting on the second coat of lullaby green. 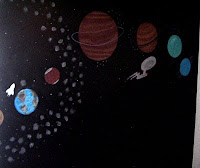 The other night Teresa was watching Disney's Peter Pan and I couldn't help but notice first line, "All of this has happened before, and it will all happen again." (Incidentally this line has been cited as the inspiration behind the same theme in Battlestar Galactica.)  I wonder if this offspring of ours might also take a liking to Star Trek and if the Enterprise NCC 1701-A might don that wall again someday.  And that child of mine better like it because we'll sell the house before I paint over something like that again...

Kirk: Second star to the right... and straight on till morning.