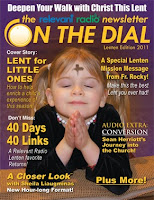 The snow was a jealous snow.  It wanted all the attention the ashes were due to get today.  The snow came and came and came -- just like the forecasters said it would.  I had to go to work to eblast out our special Lenten issue of the company newsletter.  It featured my daughter on the cover looking quite angelic, with photoshopped ashes on her forehead.  So an Ash Wednesday flavored cover really had to hit email boxes on Ash Wednesday... aka Terrible Snow Wednesday.  So my alarm clock was set to 4:30am -- to try to beat the snow to work.
I woke up.  Looked outside and it looked like there was no snow yet.  So I snoozed for an hour.  When I actually put my glasses on for a second look an hour later I realized that it had been snowing.  So off to work I went.  The roads didn't seem all too bad... until the round-about.  The Focus did a 360 round-about while going around the round-about.  So, here's to you, guardian angel, on a job well done!  Thank God the truck behind me didn't hit me... he later passed me as I slowed to five under the speed limit.
I got quite the rush eblasting the final newsletter to 26,000+.  (Special thanks to Sean O for helping me blast it correctly!)

Thankfully the snow cleared up after noon.  So I met the girls at St. Bernard's for Mass at 5:30.  Ash Wednesday!  Teresa got her first ashes... well, first non-photoshopped ashes anyway.  I did double-dip the ashes since I went to the 11:30 am Mass earlier.  In fact I heard both Ash Wednesday blessings:  My first "ashing" the priest said, Remember, man, that thou art dust, and unto dust thou shalt return (Gen 3:19). For my second coat, the priest said, Turn away from sin and be faithful to the gospel (Mark 1:15).  Sometimes in painting a house, the walls really need a second coat, so it is with me.

The snow was good packing, meaning the girls could finally build a good sized snowman for the first time this Winter.  Pretty cool.  But in the end the ashes won the day.

May God bless your Lent!
Posted by Damien Schmitt at Wednesday, March 09, 2011