The Sherlock I never knew 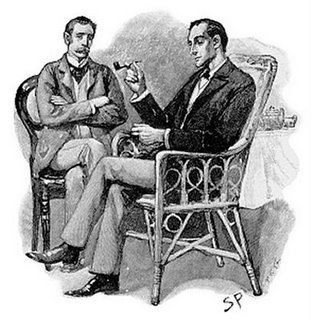 You know I always thought it was an odd choice to cast Robert Downey, Jr. as Sherlock Holmes in the 2009 movie of the same name.  But I never really read any Sherlock... I knew the great detective from pop culture -- the Scooby Doo and Fred Flintstone parodies... Star Trek: Next Gen tribute and the like.

He was a childhood hero of mine.  But I never really knew him until I started reading him like a book.

At first I found Arthur Conan Doyle's characteration of Holmes to be very Vulcan-like.  But a paragraph later, Sherlock was shooting up cocaine!  According to my research, while cocaine was considered a vice back in Doyle's day, it wasn't illegal.  Sounds like he had a morphine habit as well as his regular pipe usage.

So I'm not sure what to think of my dear Mr. Holmes except that perhaps Mr. Downey, Jr. was perfectly cast after all.   Perhaps it was... elementary.
Posted by Damien Schmitt at Tuesday, December 14, 2010