Snow (title is a work in progress)

According to Doppler and Vipir Radars and every meteorologist on TV, and Aunt Hilda's aching ankle, we're in for a whole lot of the white stuff today.  Are you ready for winter's cold embrace?
__

A small miracle to make mention of or a big coincidence at the very least.   My 8a-4p shift at the network was supposed to be in a winter wonderland.  I prayed that snow wouldn't hit the fan and everything else until after my shift.   And it was the weirdest thing - the storm made a horseshoe around Green Bay... Just as I left work, the winter mix began.

Now this isn't the first such miracle to happen but I thought I better start documenting this stuff to make it easier on anyone opening a cause for my canonization later.

Of course to truly be a Saint one might say I should have also prayed for good weather for the shift after mine.  Oops.  Yeah, I'm guessing Cyrus won't be opening my cause.  Here's what it looks like now... on radar that is... it's less colorful in real life... just a lot of white stuff. 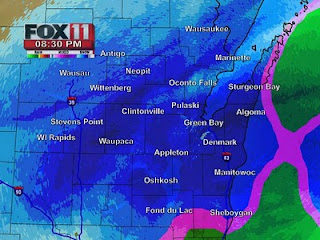